Your selection is empty

Are you sure you want to delete all items from your cart ? 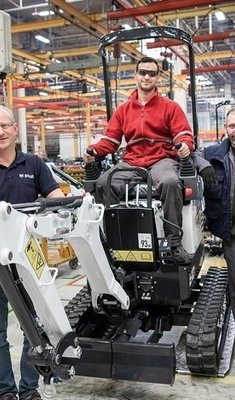 Bobcat Of celebrates the manufacture of the 10,000th unit of the Bobcat E10 mini-excavator in the same year as the brand's tenth anniversary.

As Bobcat Of tells us, the E10 mini-excavator was launched in 2008 to replace and improve previous models. It was one of the first excavators designed and manufactured entirely in Europe.

Having reached 10,000 units sold, demonstrates the success and prestige of the E10 over the years.

Today the E10 mini-excavator has evolved and improved to become what is now known as mini-excavator E10z, having incorporated the zero tail swing as well as another series of improvements that year after year have made it the perfect machine capable of dealing with all kinds of activities such as construction, demolition, renovation, landscaping, trenching and drainage work.

Its main features include:

If you want to know more about the E10z mini-excavator, don't hesitate to come to ITT Bobcat Of agencies where you will find detailed information.

Thanks for contacting us, we will get back to you as soon as possible!

What are you looking for ?